European drone regulation : how to fly out of France (cross-border procedure) ? 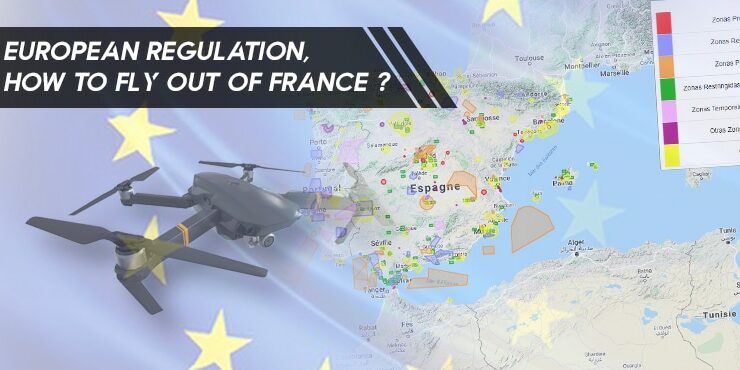 Declaration of authorization to carry out flights abroad, what about European drone legislation (cross-border procedure) ?

Are you a remote pilot of an aircraft and wish to carry out drone flights in another European country ?

Here is what the European drone legislation says. It allows a drone pilot to fly in a country other than his own.

The European transition (with the EU decree 947) allows a drone operator declared in a European country to fly over or carry out drone missions in another state of the European Union (those having signed the EU / 947 decree).

All drone remote pilots registered in France have the possibility of flying in Europe, subject to making a prior declaration of authorization to fly in the country concerned. This is a Cross Border procedure respecting the new EU 947 decree for drone operators. Until now, it was impossible to fly in another country for the French drone operator. But since the transition to the new European drone legislation 2021, it is possible to fly abroad for a drone operator if and only if the destination country has signed the EU947 decree.

Reminders of the requirements necessary to exercise a drone flight in Europe.

The drone operator must meet the following conditions :
– first of all to comply with French national regulations.
– have registered as a UAS operator to comply with the new European regulations. As you know, you must register your drone with the DGAC and have made your declaration of specific activity. The registration of each drone is mandatory on the AlphaTango portal of the DGAC.
– have equipped their drone with a digital identification and electronic reporting device.
– be a remote pilot, ie training and exams: European regulations require certifications for certain categories.
– be assured.

What is the procedure to follow to fly with your drone in a European country ?

1. The choice of the drone scenario
At present, only scenario A1, scenario A2 and scenario A3 are considered to be standard European drone scenarios. Indeed, there is currently no C5 and C6 approved drone (and therefore authorized) to perform STS-1 and / or STS-2 flights in Europe.

Consequently, if the operator of particular activities wishes to carry out a non-standard scenario (ie not falling within the framework of scenarios A1, A2 and A3), he will have to request an authorization from the DSAC as a drone operator. for a specific category (such as PRDA, SORA and / or an LUC). This is an obligation prior to any request for overflight of the airspace of a European country.

Article 12 – specific category operator authorization.
This is what Article 12 says: “The competent authority shall assess the risk assessment and the robustness of the mitigation measures that the UAS operator proposes to ensure the safe operation of UAS during all phases of flight.The competent authority issues an operating authorization when the assessment concludes that the operational safety objectives take into account the risks of the operation and that the combination of mitigation measures planned to deal with the conditions operational operations are respected. and in flight. ”

Here is the link to the official document of the drone decree EU947. Look at article 12 on page 13.

3. The interviewed country must return an authorization to fly over its airspace.
The operating license (PDRA) and article 13 (CERFA -) are sent to the European country in which the flight is to take place. The competent authority of the country concerned considers the flight request as if the operator were from his own country. The country checks whether the airspace use authorization request is made in specific areas: populated area, contingency areas, areas with restrictions for the use of a drone, ERP areas or specific overflight areas . The country checks whether the requested overflight zones comply with European regulations and are not prohibited zones to fly a professional drone or not. If all the requirements are met, the country must be able to issue a valid permit to fly.

Article 13 – exploitation outside the state of registration (only applicable for non-standard scenarios or with no class aircrafts)
This is what Article 13 says: “When a UAS operator plans to carry out an operation falling within the ‘specific’ category for which an operating authorization has already been issued in accordance with Article 12 and which is intended to take place partially or entirely in the airspace of a Member State other than that of registration, it submits to the competent authority of the Member State, in which the operation is envisaged, a request containing the information following: certificate copy of the authorization issued by the DGAC to the operator, the locations of the planned operation, including the updated mitigation measures, if necessary, to deal with the risks identified, which are specific to the air space, the terrain, the characteristics of the population and the climatic conditions of said place or places. ”

Here is the link to the official document of the drone decree EU947. Look at article 13 on page 15.

The flight authorization procedure is currently very cumbersome and many states are resistant to the authorization to fly drones on their territory. By way of illustration, several large states of the European Union have made the Cross Border procedure more cumbersome by refusing flights for procedural flaws and / or by imposing significant taxes on each flight request studied.