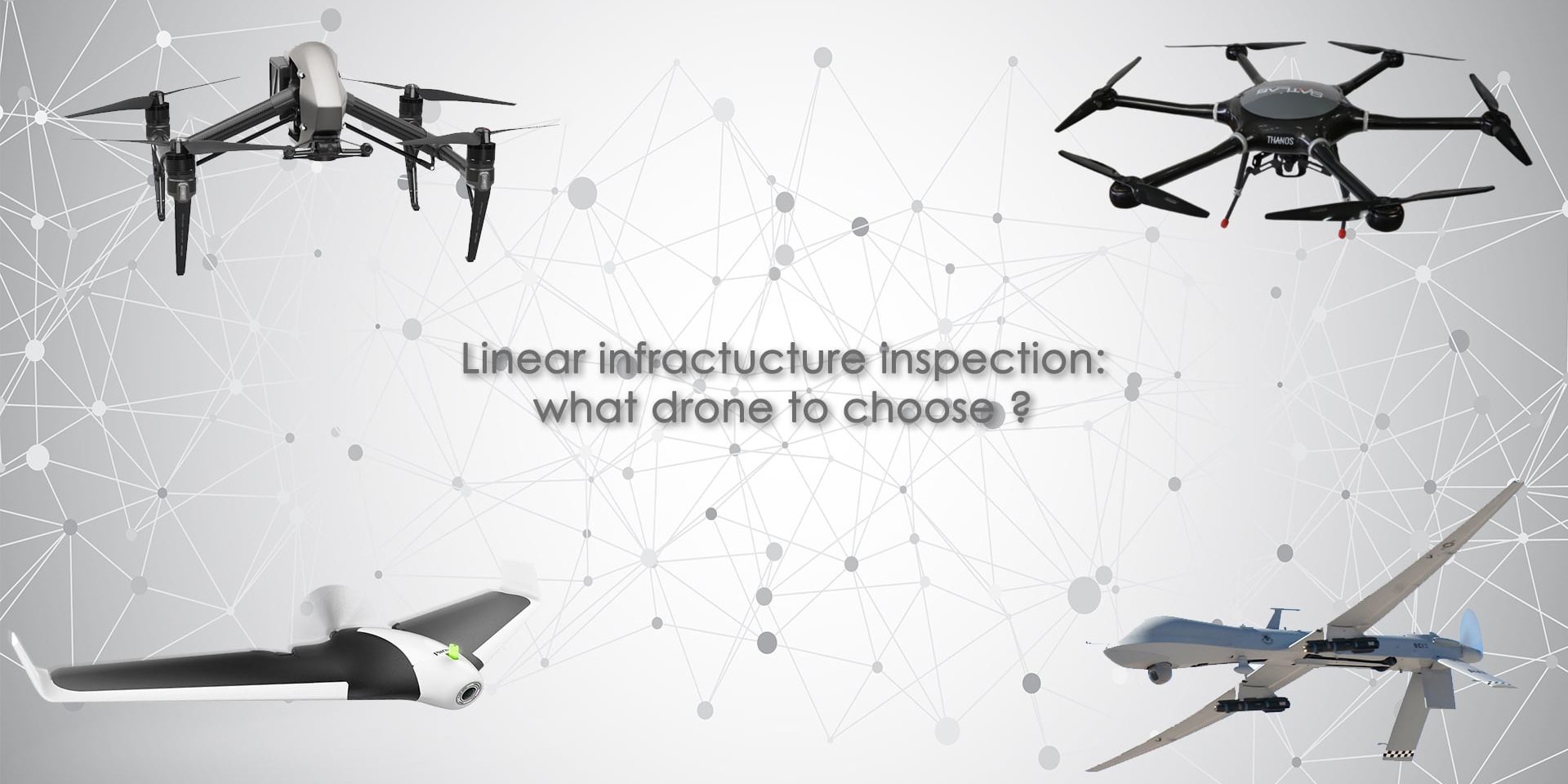 How to choose a professional drone in the context of linear infrastructure inspection activities ?

What is the best professional drone for inspecting linear infrastructures ?

Currently, there are around 20 manufacturers of civilian drones around the world selling around 100 models of production drones. All these vectors have different technical characteristics in order to be able to best fulfill specific missions. In order to be able to choose your professional drone, you must first draw up specifications relating to the particular activity you wish to exercise. This work will allow you to choose the best professional drone by opting for the most suitable technical and material solution.

Each of its areas requires different operational criteria, the most important of which we have listed below: (i) Flight in an urban area (or not), (ii) Accuracy around take-off / landing areas, (iii) Need for a hover to execute the image capture, (iv) Desired nominal flight altitude (must the vector be invisible when shooting).

These first operational criteria should already allow you to easily determine the class of your aircraft (balloon, airship, helicopter, multirotor, fixed wing).

In this post, we will focus on professional drones dedicated to the inspection of linear infrastructures. Since this particular activity often requires being able to take several shots close to the infrastructure with different angles of view (prohibitive for a fixed wing) AND to cover great distances (prohibitive for a balloon), the class of your aircraft must be a multirotor.

What type of sensor should you use on your professional drone ?

Different types of sensors are used to take pictures (it depends on the nature of the desired analysis).

These sensors, using acoustic or electromagnetic waves are split between: (i) Optical cameras, (ii) Thermal and / or infrared cameras (to detect temperature failures on an electrical installation, insulation faults or even thermal leaks), (iii) TeraHertz cameras (vision inside composite materials), (iv) Multi-spectral cameras (recording of simultaneous images on several wavelengths), or (v) Lidars (recording of 3D images in the form of point clouds).

The operator must here make an inventory of the list of sensors making it possible to carry out the missions referred to in the context of its specific activities.

However, the vectors are compatible with very few sensors. Indeed, many parameters must be validated at this level:

As part of our illustration, the operator wishes to produce “basic” aerial images of its infrastructure in order to measure its state of dilapidation. An optical camera with 1080p HD resolution (1920 x 1080) is sufficient.

Many HD optical cameras are natively integrated into many vectors (especially for DJI drones).

What radius of the mission for a pro drone ?

As part of his linear infrastructure inspection, the operator may be required to intervene in an urban area or in a rural area (with a flight out of sight). Its specific activity may therefore be subject to operational scenarios such as S2, S3 or even S4.

However, the vectors must be approved by the DGAC in order to be able to evolve according to these operational conditions (which is not the case with all series drones).

In addition, the operator will want to benefit from the greatest possible radius of action. As the infrastructure is linear, the performance criterion to be studied HERE will be neither the flight range nor the range of the vector, but the range of the radio control (limiting factor) often limited to less than 8 km (which would allow to inspect from a point about 20 km of line).

In the table below, we have compared four DJI drone models.

In our case, selecting a Mavic Air 2 drone to carry out this type of mission is not optimal because the flights will all have to be done on sight (at most 200 meters from the remote pilot). Likewise, selecting a Matrice 300 RTK drone is not optimal either because the autonomy of the vector will not be exploited (mission range of 4 km maximum, the vector not being S4 approved).

In our illustration, it will be wise to select a Phantom 4 PRO V 2.0 drone.

Geolocation and time stamping of aerial shots by drone

Large contractors often wish to build up in their Geographic Information System (GIS) a complete video library of their network infrastructure. To achieve this, it is therefore critical to be able to time stamp and geolocate all the frames of the aerial videos produced.

However, this data is made less and less available by aircraft manufacturers.

The inspection of linear infrastructures is currently constrained by two key parameters: (i) Identify an S-4 approved vector to quintuple the range of action of missions, AND (ii) Have a system allowing geolocation and time-stamp the video stream from the sensor in order to be able to use it in the GIS of the ordering party.

What can DRONECONTROL on-board system bring to you ?

DroneCONTROL offers the drone operator the possibility of: (i) Time-stamping and geotagging the aerial shot, (ii) Retrieving the drone’s video stream in real time, and (iii) securing the aerial recordings in by -passing the video storage on the vector.